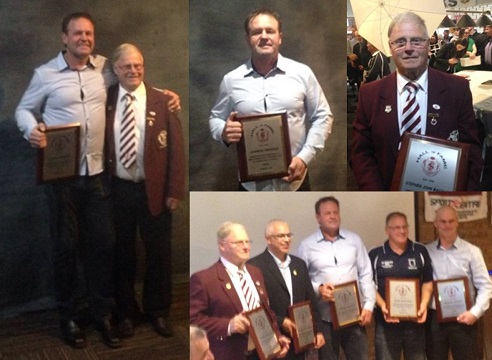 Happy Valley Football Club is proud to have had two people associated with the Club inducted into the SFL Hall of Fame on Sunday July 24 and congratulates both for their great service to the game over many years.  Thanks to the SFL here is some information about both men –

Steve Macklin has been an administrator, coach and player over a 27 year period and continues to be involved in the SFL.  He is a Happy Valley and SFL Life Member.  Steve Macklin is a great servant to the game of football. He has played at various levels at many clubs and, during his time with the Southern Footgball League, has shown wonderful communication skills with all members of the football community. He is welcomed at all the clubs and is highly respected by football administrators at the highest level. If there were one word to describe Steve it would be “loyal”.

Darren Twigden has been a player and coach over a 17 year period and was a HVFC Premiership Player.  Darren Twigden is a player with the reputation of being one of the hardest players to represent Happy Valley and was a stand-out left foot half back and the key to a wonderful defence during the club’s halcyon years. He played in six premierships (1992, 1993, 1995, 1996, 1998, and 1999)  and is the only player to have won two James Warren Medals (1992 & 1996). In 2011 he was named in the SFL Best Ever Team and in 1998 he was awarded a player life member of the SFL.  He is also a life member with HVFC. He was a great clubman who participated in all club activities and for some years was the Players’ Representative to the management committee. Unfortunately Darren’s occupation caused him to spend periods of the football season working in the country and caused him to miss many matches. He later played and coached at McLaren in Great Southern Football League where he currently holds the position of President. He always participated in fund raising activities for the club fund raising and in one of his better efforts he sold heaps of tickets for a raffle for an “overseas trip.” The winner’s excitement was a bit dimmed when he found it was to Kangaroo Island. Congratulations to both men who are worthy inductees into the SFL Hall of Fame.